Or: I Swear I Watched the Super Bowl and This Post Has Almost Nothing to Do with Sports

* Wait, is that not a football thing?

By nature, I am a bookish introvert. One of my favorite ways to spend an evening is wrapped up in a blanket, tucked up on my couch with a book**.
**And marshmallows. And wine.

But not many adventures happen when you’re safely enjoying the company of your couch cushions, and I am a big fan of adventures. There is a happy, malicious part of my brain that has rebelled from my quiet reclusiveness, and makes regular, extroverted demands on the rest of me.*** And last Monday, that part of my brain decided that it was time for a party.
***I also blame this part of my brain for all bad decisions ever made.

The bad decision devil is personally responsible for that one time I decided to…uh, nevermind. That’s a completely different story that you should forget about immediately.

I tried to argue with her using logic and sensibility. 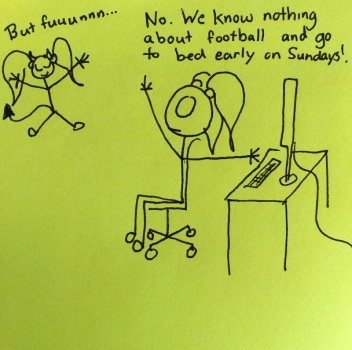 You only think I do not have these conversations with myself out loud. At work.

But I’m not very good at it, because logic and sensibility sound very boring and not at all like “Let’s drag a bunch of our friends over to eat junk food and pretend we know all the rules of sportsball. Uh, I mean, football.” 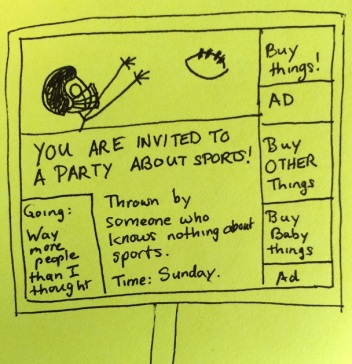 Facebook is really determined to figure out what ads are most effective for selling things to me. They have yet to try to use dinosaurs or explosions, so they still haven’t outsmarted me.

And so that’s how I decided to throw a Super Bowl**** party. I invited many people through the magic of technology and the Internet. I reveled in the joy of party planning like an adult and the impending fun of unhealthy food and friends.
****Superb Owl. Sportsball. Can you tell I am clearly the best and most logical choice for hostess of a football party?

Yes. This is a song. I encourage you to sing it next time you throw a party.

And then yesterday morning arrived.

It’s like waking up the morning of the middle school science fair and realizing you never actually MADE the paper mache volcano.

I woke up to the realization that I had less than 8 hours to clean my living space and make snacks and pretend to be a cool, collected, organized human being***** instead of a girl who periodically builds blanket forts and lives on boxed macaroni and cheese.
*****Just in case I might suddenly be able to fool my friends into thinking I have my life together. 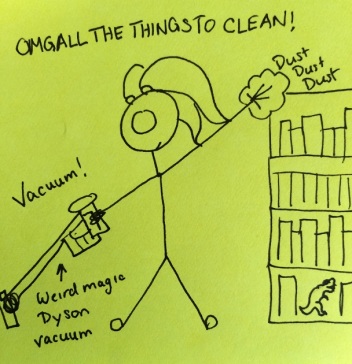 Because two-handed cleaning is always effective.

Just when I decided I had clearly mastered adulthood and was definitely going to be prepared by the time people came over, disaster struck.

IT WAS THE BIGGEST BUG IN THE ENTIRE UNIVERSE AND HE WAS LOOKING RIGHT AT ME.

I may be just slightly mortally terrified of bugs.

But I also was perpetually aware that, in addition to a bunch of friends, I had invited over a guy I like. And he was coming over early to help me make proper football snacks.

Because if you tip toe up to bugs, they won’t notice your intentions to murder them horribly. It’s also harder to run away on your tip toes.

We circled each other for a good three minutes. But I was motivated.

Technically, that book is biodegradable and so probably not littering.

And that’s how my copy of Moby Dick ended up in the bushes outside my apartment. I am educating nature.

24 thoughts on “Let’s Get Ready to Rummmmblllleee…*”

Turns out, it's not the hardest part.