*Please add one “, you total idiot.” For each subsequent time this life lesson is learned.

In short, I am a total idiot.

When I was a child, I was scared of a ridiculous number of things. Spiders, every insect in the world (including lightening bugs, which is an unfortunate fear for a child living in New Jersey), every single Scary Stories book, Dr. Teeth from The Muppets…They all got under my skin**. This was a problematic condition for a girl who has an older brother and who lived in close proximity to four rowdy (and fun) male cousins.***

**In the context of my childhood nightmares, this is a completely literal statement.
***Who all were definitely not afraid of picking up spiders and using them as projectiles.

This is a really terrifying face when you are very small and afraid of being eaten.
Click for Source, which is a super amazing Muppet-focused blog.

I was, however, deeply in love with classic vampires**** and bats. Because, you know, those are healthy obsessions for a child of seven. By the time I was a teenager, I decided that since I clearly was not scared of SOME things that should be scary, I could obviously get over all my fears and be queen of the scary things.*****

****Real vampires never sparkle and totally intend to eat you, but not in a terrifying cannibal way. Cannibalism is a total deal breaker.
*****Why yes, I was goth as a teenager. How did you guess?

I decided I was tougher than tough, and impervious to traditionally scary things. I read horror novels by the bushel******. I daydreamed about how adorable I thought monsters were and how we would totally be friends in real life. I watched every Hellraiser, Alien movie, Friday the 13th, and Halloween movie I could get my hands on.

******Bushels clearly being the most standard unit of measurement for mass quantities of books. 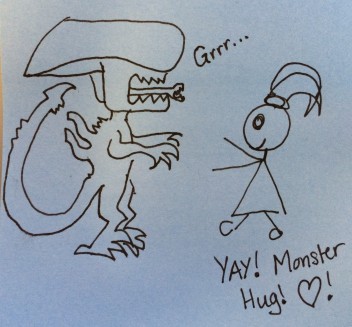 It occurs to me that the less coffee I’ve had before randomly drawing stick figures, the weirder my pigtails look.
Also, teenagers have terrible survival instincts.

And promptly relearned a lesson I had learned as a small child: Watching horror movies right before bed leads to horrifying night terrors.

But nevermind that, because suddenly it was time for college. And in college, watching scary movies late at night is a staple of alcohol-fueled idiocy and attempted dates.  Life lesson relearned. Twice.

And now we come to my mid-late 20s.****** Nestled in the soft bosom of adulthood, I am confident in the fact that there are no monsters under my bed. Nothing lives in my closet, waiting to jump out and eat me. There is no serial killer behind the door. My life is remarkably safe.

So, secure in this knowledge, I settled in to watch The Conjuring late at night, on a work night, by myself, with all the lights off.

Yeah. Nothing could go wrong watching this alone in the dark late at night.

And promptly spent the rest of the night wide awake, certain that invisible-demon-monster-witches had all died in my (built in 2008) apartment complex, and my cat was going to try to kill me if I fell asleep.*******

*******This has pretty much nothing to do with the plot, so don’t worry. No spoilers. You can still watch this alone and in the dark.

In other news, this is a real place:

My life was incomplete before I knew there were whole rooms dedicated to trampolines.

So, there’s still hope and joy in the world.

Turns out, it's not the hardest part.