Or: Why the Wand Thingie in the Shower is the Greatest Invention in the World

It occurs to me on a remarkably regular basis that if I was living in another era (say, for example, Victorian times, when “pants” was a dirty word and people wore clothes with eighteen billion heavy layers), I would not survive, much less thrive. I’m a product of The Future, and I love it here.**

Don’t worry. I have a helpful example to share with you to demonstrate my very limited technological-survival time range.

We’ve previously discussed that I am not a morning person. I love sleeping with a deep, abiding passion, and I view the morning sun as my arch nemesis. Things are even worse when I have to get up before the sun has started to peek over the horizon. 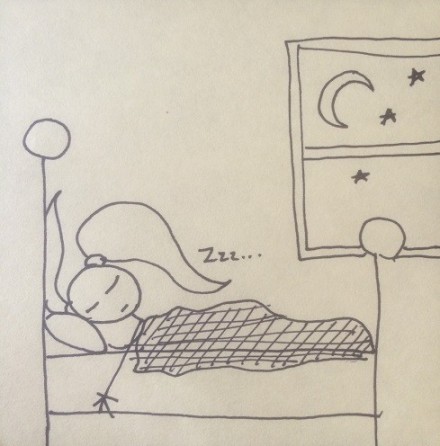 For the purposes of this demonstration, let’s pretend that I don’t have blackout curtains that deny the sun the ability to enter my bedroom. Let’s pretend together.

If I have to get up before the sun, I’m forced to acknowledge that morning is not the sun’s fault, and that really ruins my arch-nemesis-hating.

On the other hand, we all know who the true enemy is in the morning: 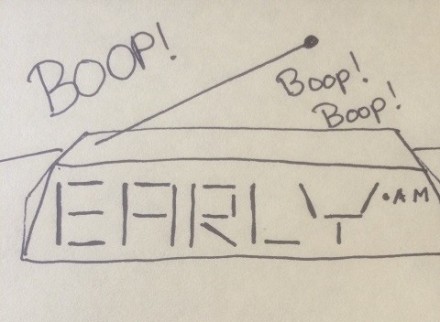 Yes. Early O’clock is a legitimate time. My alarm clock declares it to be so every morning.

You’re not fooling anyone by pretending to be helpful, Alarm Clock.

Nothing gets the adrenaline going in the morning quite like the sound of my alarm clock. It probably also doubles as an impending nuclear war alert.

The morning is a confusing time for me, which probably just highlights the fact that in the days of cavemen and super-predators, I would have been a delicious morning meal.

I also sound like a zombie when I walk. And look like one. I really don’t know what happens to my hair when I sleep.

My general level of morning awareness hovers right between “completely oblivious” and “just awake enough to not walk into things.” 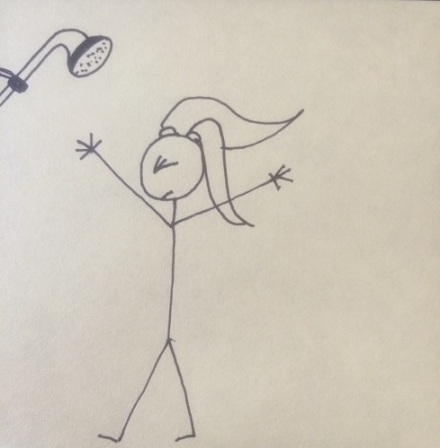 This is an accurate depiction of my morning in-the-shower pose.

Which is incidentally low enough on the awareness scale to be completely confused when the shower does not automagically turn on. I mean, this is The Future, right?

Ok, we should probably invent me-sensing showers before we invent flying cars. Get on it, Google.

Eventually, though, I successfully manage to both turn the shower on and hurl soap at myself.

This is as close as the Internet will ever get to seeing me in the shower. You’re all welcome.

On this one fateful day that we’re discussing, however, I discovered that my lack of awareness in the morning had delivered me into the grasp of a horrifying nightmare. 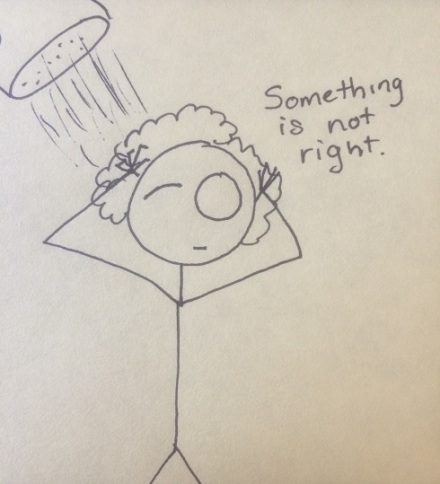 This is how you end up with soap in your eyes at 5:30 in the morning.

The most terrifying, horrifying thing that can happen to a girl in the shower outside of a Hitchcock film: 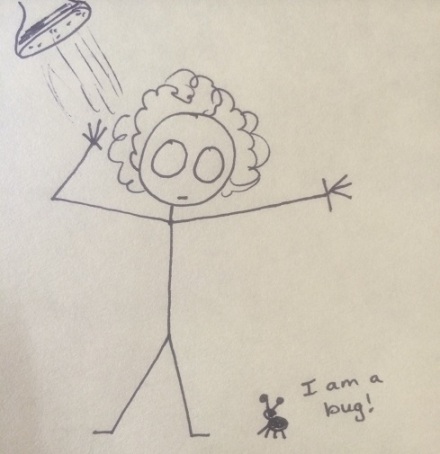 In any other time period, this would have been the end of me***. This enthusiastic insect was sharing the tiny box of a shower with me. And guys. GUYS. He’d been there the. Whole. Time.

***Seriously. No hyperbole or exaggeration at all. At. All.

This is my grown-up tough-girl face.

Since my first survival technique is “close your eyes tightly and pretend you are still sleeping, and then it will be a dream,” this could have been a very dangerous situation. Then, however, something occurred to me. Something important. Something life-saving.

You’re feeling bad for the bug, aren’t you?
Don’t let him trick you. You can’t trust anything with more than four legs, and he had like, 80.

It occurred to me that the inventors of my modern shower had already thought through this situation. They’d invented the perfect bug-removal device.****

****DO NOT GOOGLE “Uses for shower wand.” THE INTERNET IS WRONG. It is for killing bugs. 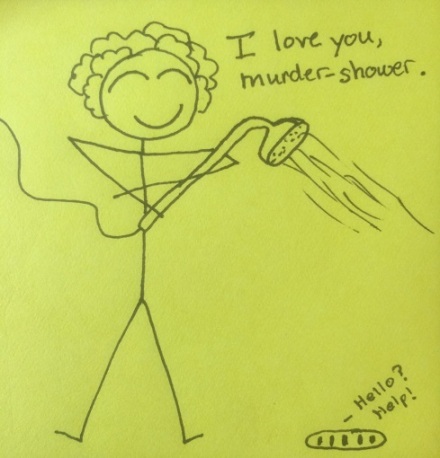 The future has all the best murdery devices

So, you see, without the tools of the future, I’d be food for all SORTS of horrible creatures.*****

*****Like itty bitty insects. Which are the most dangerous kind.