And it’s all going to end because of clothes.*

*Hyperbole? Me? I don’t know what you’re talking about.

Ok, folks. I’m heading back into uncharted territory. Today we’re talking about fashion. No, I’m not talking about what’s walking down the runways at Fashion Week, or what Victoria’s Secret models are strutting around in. (They’re only walking like that because they’re trying to keep warm, people.)

I’m talking about what’s catwalking across the Internet on Kickstarter. 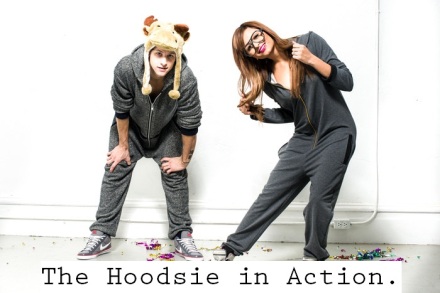 **In fairness, I bet these would totally keep those Victoria’s Secret models warm.

First, the overall was invented. This was not the fault of America. These were pretty rampant across industrial countries – a practical garment to keep man and lady factory workers from finding each other attractive protect workers from dangerous materials.

Then came PajamaJeans***: “Pajamas you live in. Jeans you sleep in.™”

I’m just curious: WHICH designer are we talking about here?

***I actually thought this was an SNL skit when I saw the ad. Truly.

You know. For the American who refuses to ever, ever get undressed. They’re for the lady-equivalent of Tobias Funke’s cutoffs.

And then there’s the onsie.

This isn’t a modern invention. This is old-school children’s pajamas. I confess. A few years back, I was desperate for footed jammies. A warm body-sock to flounce around in? Why yes please.

They are, in fact, so blatantly unflattering that I can only show you a picture of the sock-part of my footed pajamas. 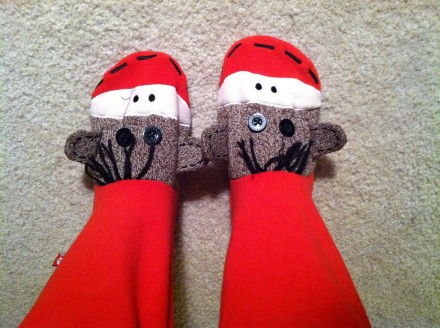 Because what grown woman does not long for monkeys on her feet? Answer me that, dear reader.

But the makers of the Hoodsie disagree with this generally accepted fact. You know how I know this? 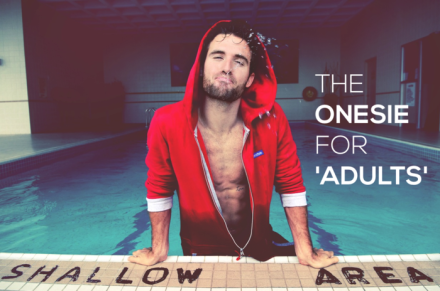 When I put on my onsie pjs, I instantly think “Man. These would look great in the shallow area of the pool.”

That man is really showing off the versatility and allure of what is basically a person-glove. This is a redefining moment for the onsie, y’all. They even confess it in the picture. It’s “the onsie for ‘adults’ “. I did not write that, guys. It’s what’s actually on the picture.**** The inventors of the Hoodsie are convinced you will wear this anywhere and everywhere.

****I also didn’t write “Shallow Area,” but I really think that’s what sells it for me.

And you know what? I totally see college campuses overrun with these:

Which basically means we’re all done with pants, people. Pants are over. It’s all downhill from here. Before you know it, we’re all going to be wearing shiny body socks, like the people in Wall-e. And that’s basically the end of the civilized world as we know it. First, it’s the decline of pants. Next, it’s replacing all food with nutrient goo and robots taking over the world.

It’s all over, people. The onsie has won.

Credit Where Credit Is Due: The source material for today’s post was introduced to me by the infamous Mr. L.

More Credit Where Credit Is Due: The Hoodsie is a Kickstarter Project, so it’s the brainchild of some people trying to turn their dream into reality. And, even though it’s clearly a sign that the civilized world is in decline, and we’re all going to start thinking sacks are sexy, I fully support these guys getting their funding – if only because otherwise, I never would have dreamed up a picture of a guy in an unzipped onsie in a pool.

Give them money, get your very own onsie.