Remember when I told you I had weekend adventures? Well, I wasn’t lying. I went to a “Collectables and Antiques” show.*

*Hey hey hey, that kind of crass jealousy is uncalled for. I would have invited you if I’d known you wanted to go so bad.

And I stumbled right back into Regretsy territory when I found the single greatest, most flummoxing craft project known to man: 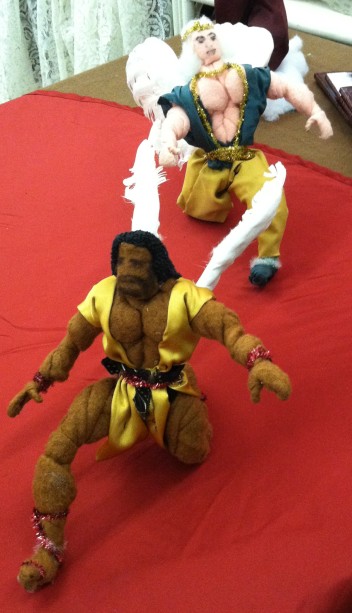 I totally didn’t pose them like this, guys, but I really believe they’re doing a slow-motion chase scene for Jesus.

I’d like you to meet Buff and Spiff, the Steroid Angels of Christmas.**

**These may not be their actual names.

I found them on a table with a display of their compatriots: 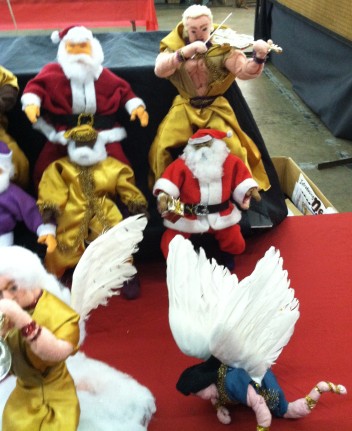 And I was speechless.*** I marveled at their strangely formed muscles, which were reminiscent of Tommy Wiseau in The Room****. I marveled at just how many of these decorations someone had taken the time to make. I marveled at who would put these in their home during the joyous time of the holidays.

***Ok, not speechless enough that I didn’t pick them up and invent stories about how they defended Christmas through the power of steroids and glue-on wings, but I did that all in my head, so TECHNICALLY I was still speechless.

****DO NOT GOOGLE THIS. Some things cannot be unseen.

And it was only after I’d walked away from the table that I realized that I would totally put them in my home during the joyous time of the holidays. And I would like to give them to all my friends.

So, obviously, I went back the next day.

Only to discover that the frustrated seller (who apparently had not sold a single ware, according to the seller with the table next to her) had decided not to return for the dismal Sunday sales. I was crushed.****

In my time of grief, I did what any rational girl would do. I turned to the Internet.

I’m going to be honest. I fully expected to find these on Etsy. I expected them to be on the front page, singled out for their amazingness. I mean, who wouldn’t want to deck their halls with the bulging pecs of plush angels?

Because Etsy let me down. After hunting through 72 pages** of possible choices for “angel doll” and “Christmas angel,” I had to throw in the towel.

**Because I am super dedicated to giving everyone ripped angels for Christmas. I’m willing to sacrifice for my friends, y’all. Don’t you wish you were on my gift-giving list?

But I did find these precious gems.

1) The Nakedest, Flattest, Most Concerning Cherub 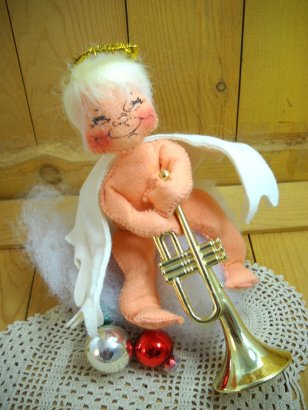 In defense of this seller, this is apparently vintage. So, let’s all get concerned about our predecessors, people.

2) The Most Confused Angel Impostor 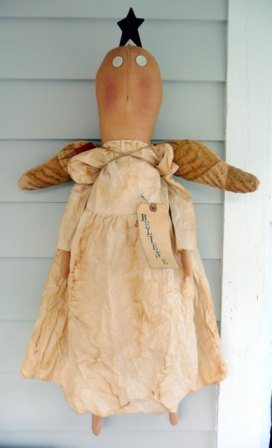 It’s probably so confused because it’s hanging by it’s head.
Click for source!

This angel appears to have been stricken by poverty, and hung up by her head. Someone buy this angel and get her a nice dress. And maybe a cheeseburger, And a bandaid. 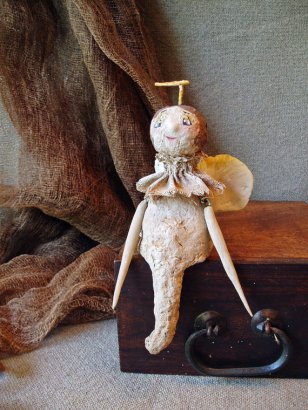 I really want to say things about this, but I really just have no idea what to say. Other than I really, really hope that’s an elephant trunk.

4) The Gremlin in Disguise 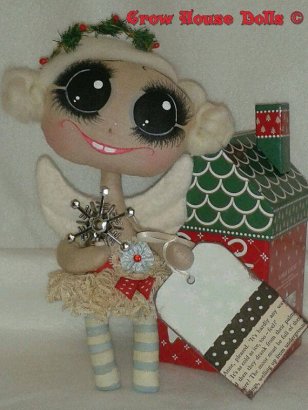 Seriously. Don’t let it in the house, don’t get it wet, and don’t let it eat after midnight.
Click for source.

It smiles the same way after it eats your children.

So if you need me, I’ll be in mourning. But at least my Christmas shopping is done.