Or: That One Time I Used the Internet to Actually Look Something Up*

*Did you know that the Internet is a great source of factual information?! It’s TRUE!

In case you somehow missed it, I have a cat.

You don’t have to be old to be a cat lady! It’s equal opportunity!

She is an important part of my life. I’ve had her since I was 15. When I was 15**, I was not very good at doing things like “leaving the cat alone” and “not picking her up and snuggling her with every fiber of my being.”
**Also now. Still now. She’s just so cute.

Some people have formed opinions regarding the fact that my cat shows me an equal level of obsessive attention.

When I was 15, this resulted in a modest level of curiosity. As an avid fan of The Muppets, I was relatively sure that “Stockholm Syndrome” meant that you had some form of speech impediment that made you talk like the Swedish Chef: 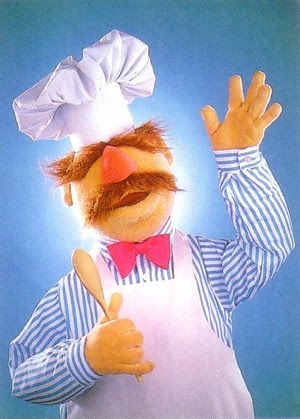 Bork bork bork! Hergy Blerghy Bork!
Click for source, because this is not a picture I took.

In fact, Stockholm Syndrome has nothing at all to do with chefs, and very little to do with Sweden. The term dates back to the 1973, when an armed robber strolled into a bank in Norrmalmstorg Square, in Stockholm, Sweden. (Click here to check out one of the many tellings of this story.) He took four hostages and made life wildly unpleasant for the police for several days.

This is probably the most dangerous doodle I have ever drawn. Also, I only felt like drawing three hostages, because this is a generic example.

While this was going on, observers noticed something super weird.

If only all kidnappers, hostage takers, and generally terrible people were all this forthcoming.

The hostages were resistant to police, but companionable with their kidnapper. It doesn’t make a whole bunch of sense at first glance. 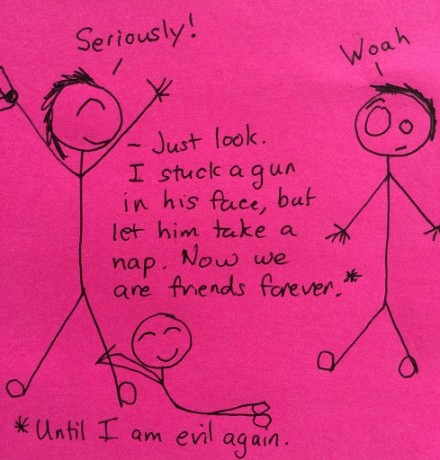 In fact, it seems downright counter-intuitive

But when you look at things historically, it does seem a little more logical, if completely bleak. 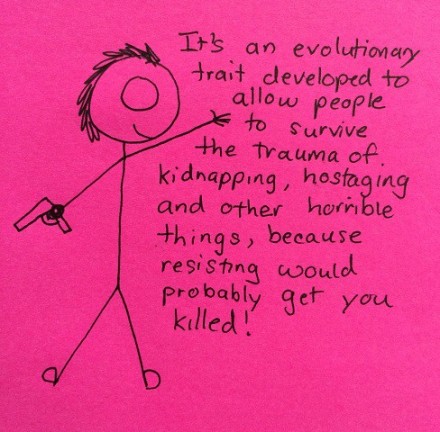 Not all gunmen are so explanatory.

It doesn’t have much place on a humor blog. 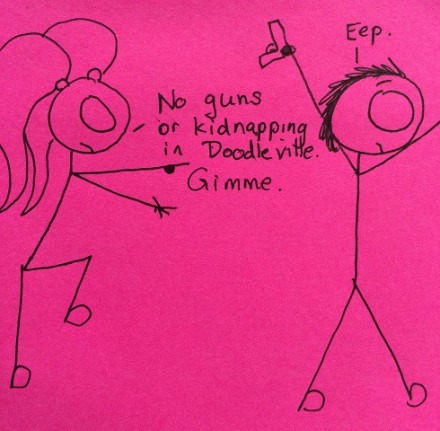 Because yelling at someone with a gun is totally safe….if you’re a stick figure that I draw.

It’s a syndrome seen in kidnapped victims, hostages, and victims of abuse. 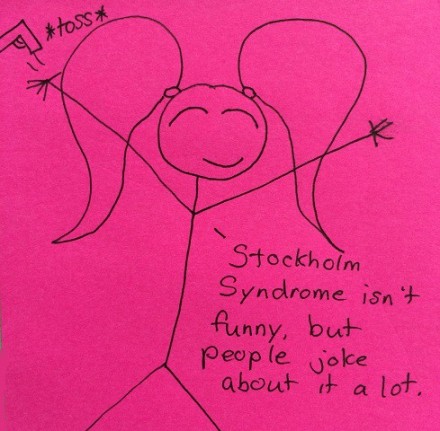 It always confused me why people would regularly toss around a term that has such deep psychologically damaging implications.

Anything is possible. Except spontaneous flight.

Especially when there’s obviously a much more rational explanation.

She totally is. Especially if food is involved.

Yeah. That must be it.

Also, Here Is Why I Did Not Blog Yesterday:

I had to go to the eye doctor. It was very time consuming***.
***Also, I probably took a nap. Maybe.

As an aside, Stockholm Syndrome is super serious, as is abuse and kidnapping. They don’t just happen to girls and women, either. If you happen to know someone who is, or might be, suffering from abuse, kidnapping, or other terrible things, here are some great resources to help:

And let’s all try to treat each other like human beings, ok?