That’s right. Oprah isn’t the only one with favorite things.

This post could have been entitled “Someone hid all the coffee in the break room and so I’m probably going to go to prison,” but I thought that was kind of a mouthful. So, instead, I bring you one of my favorite things. 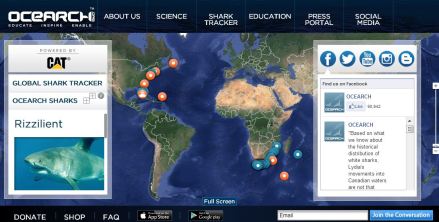 OMG, y’all! You can follow SPECIFIC SHARKS. And his name is “Rizzilient.” It’s like I’m stalking a shark rap star you guys!!! http://www.ocearch.org/

Shark stalking. Because sharks deserve more than 1.92% (1/52, in fraction form. That’s right. This is a mathematical reference to Shark Week) of your year.

I’m not even going to tell you how many hours I have sunk into stalking sharks while listening to the theme from Jaws. (Hint: It’s definitely more than thirty.)

So why is shark stalking cool?

(…That’s just a silly question. I know. It’s condescending of me to even pretend you would be asking that. You’re cooler than that. I know. But not everyone reading this is! So I have to explain it to them. Oh, man. You’re so patient. I’m so glad I have readers like you.)

Shark stalking is cool, and worthy of favoritism, because of science. You may think it’s because of how sharks are totally awesome and capable of eating people and have their own theme song, but it’s (mostly) not. Have you ever thought about how amazing it is that we can use technology to find out where one single creature is on the face of the planet? Under the ocean, no less? I mean, c’mon. If I told you to find one specific shark, and you had no access to the Shark Stalker, you’d be doomed.

Science has expanded on the human ability to creepily watch something no matter where it is in the world. That. Is. Amazing.

Today’s favorite thing has been brought to you by my friend Stef, who is quite obviously super brilliant and deserves a cookie. A shark shaped cookie. 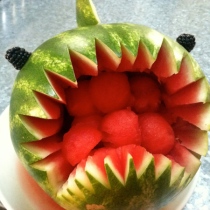 “I AM SO MUCH COOLER THAN A SHARK COOKIE.”