But in my defense, everyone knows you’re not supposed to actually DO anything on New Year’s Day. You’re supposed to huddle on your couch in wide-eyed shock that yet another year has officially passed, and the horrifying realization that you rang it in by attempting to drink all the booze you could find.

So, basically what I’m saying is: I celebrated New Years in line with all those who came before me, carrying on traditions designed to destroy my liver.

This sums up both my expectations for the new year (More dinosaurs, shinier hats), and how amazing my Christmas was this year.
This was a present I received. It is a handcrafted dinosaur serving dish. Because my friends are AMAY-ZING.

And then I slept through a blogging day.*

*Yes, my mother IS proud of me. Why do you ask?

We had the most amazing New Year’s table. Don’t even try to deny it.

If you’re a grown woman and your boss asks you what you’re going to dress up as for Halloween, do not say “a stegosaurus.” Just say “dinosaur.” Your specificity will undermine your professional adulthood.

I have a problem. It’s called “terminal honesty.” This is probably the result of being a chronic liar in the sixth grade.

Parents: “Daughter, did you do your homework?”

Parents: “Daughter, you have apparently not done homework for three months.”

The disappointment in my parents’ eyes eventually (it took awhile) guilt-ed the devious liar-ness out of me. And resulted in my horrendous honesty in the face of nearly everyone, including my overly normal employers.

Out at lunch yesterday, we were discussing my coworkers’ many children and Halloween. As the only employee in this group who hasn’t made any tiny people, I tried to avoid any awkward participation in this conversation. Until all eyes turned to me, anticipating my contribution of Halloween plans.

Devoid of children of my own to draw attention away from my inner child (who escapes often), I maintained my aura of expert cool by mentioning that I’m attending a party at a local art studio. (Sounds cool, right? Yeah, we’ll just skip over the fact that this is also the place where I go to watch movies like “Sharknado” and “Laser Blast.”)

“Oh?” said my boss. “What are you going to dress as? It must be a costume party.”

“Oh, I’m going as a stegosaurus. I made the costume this past weekend.” I replied.

And then, as the expressions of my boss and coworkers changed into frozen smiles, I realized something. 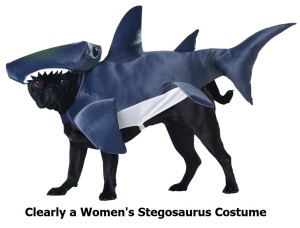 One of the options that results from a Google Image Search for “Women’s Stegosaurus Costume.”