When I was a child, Gushers were new. Or, at least they were a very big deal. Sometimes it’s hard to tell the difference. These tiny hexagons of sugar were my first introduction to “sugar objects filled with goo juice,” and it was not a pleasant experience. 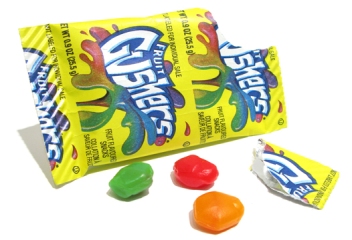 These are Gushers, if somehow you missed the mid-to-late 80s and all of the 90s.
Click for source!

Now, as a sugar-addicted child, one would assume that I would have jumped at the chance to eat anything filled with EXTRA sugar. And I did. After begging my parents profusely*, they humored my commercial-driven need to try these tasty treats.

*Marching behind them in the grocery store chanting “MomDadMomDadMomDad” at full volume. I’m a polite and effective beggar.

Only, they weren’t tasty. The filling was TOO sweet, and also oddly textured. The way it sort of squashed and then leaked fruit-ish flavor all over my mouth was disconcerting. It was a horrifying surprise, like going to hug your doctor and ending up getting a shot**.

**THAT WAS A DIRTY TRICK, DOCTOR KNICKERBOCKER, you mothersneezin’ trickster.

I have hated all goo-filled candies ever since. Whether it’s sweet or sour, fruit flavored or chocolate, I am just not a fan. In fact, if Wilford Brimley REALLY wanted to stop me from getting diabetes***, he’d stop volleying for Liberty Medical to deliver drugs to my door, and just ban all candies that didn’t have some sort of gooshy filling.****

***Sorry. I mean Diabeetus.
****While I am medically aware that this is not how one gets diabetes, and that there are other types of diabetes that people are born with, this does not stop me from propagating the scientifically inaccurate belief that eating sugar directly results in diabetes. Because rumors are fun and never problematic.

But I have learned I am alone in this. 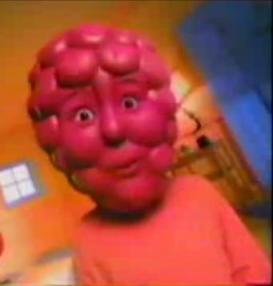 How did these ads not scar all of us for life? I really don’t want to turn into a raspberry. I saw Willy Wonka & The Chocolate Factory.
Click for source.

All my friends, and apparently the Internet, are nuts for sugar-with-more-sugar-inside. How do I know? Well, the Internet includes directions for this:

Seriously. This is a thing someone made. And presumably ate.
Guys. This HAPPENED to someone.
Click for source and instructions. You’re welcome.

This left me speechless. Until my further Googling led me down the rabbit hole. The rabbit hole apparently leads to a place called “Fruitsnackia.” And it is disturbing.

Because these days, we need to clarify to children that giving fruit snacks names and a homeland doesn’t mean you shouldn’t eat them. It’s just advertising.
Click for source.

And IN Fruitsnackia lives Larry. 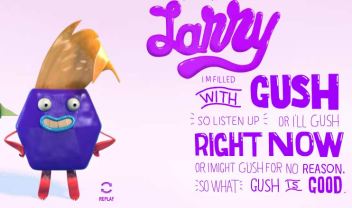 Meet Larry. In the introduction animation, he taps his side and then drinks his own delicious gooey insides.
Click for source. I dare you.

I don’t even…I…he…but…that isn’t even ENGLISH. I’m not sure whether “gush” is a threat, a come-on, or a state of being. It’s pretty concerning though. And what’s more concerning is that people keep buying filled candies. No matter how gross or creepy they get, there are other candy makers out there waiting to add options to the market:

I stole this picture from my friend who enjoys these probably-poisonous snacks. I am sharing it with you out of concern.

This picture unsettles me for two reasons. One, we all know that the only real red licorice is a Red Vine, and two, Twizzlers is expanding the filled-candy market further. I am growing more alone in my stand against inner-candy-goo by the second.

But don’t worry. There’s still hope for future generations. Because the terrifying land of Fruitsnackia yells at your children***** to take a break and go outside and play.

I still don’t know what “gush” means in this context.

Because if you’re on a website that brings to mind a cannibalistic acid trip, chances are. you need a breather pretty frequently. Apparently.

I know how to write for your business